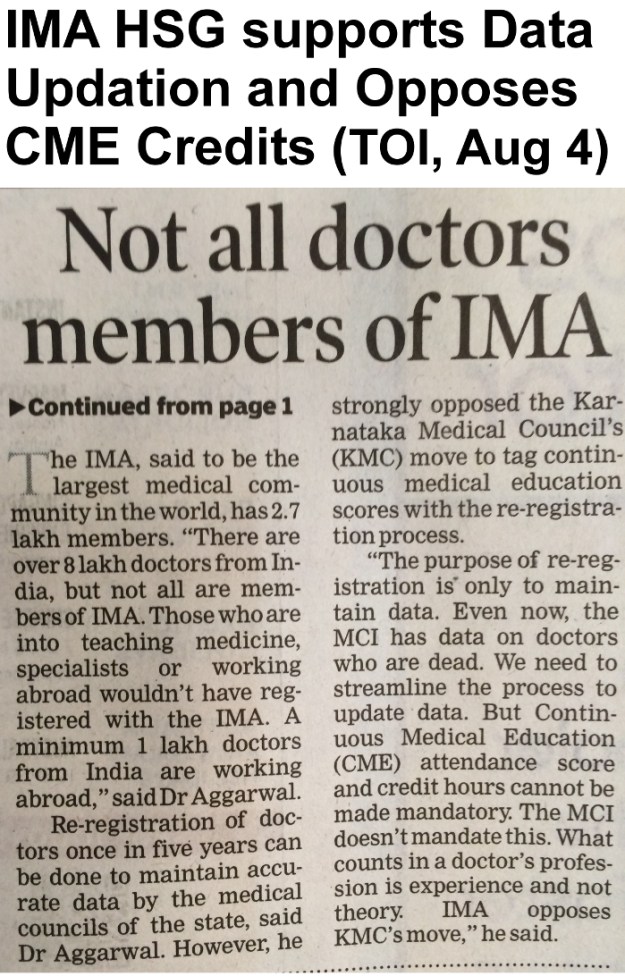 The Karnataka Medical Council, which had earlier proposed, through some media messages, to enforce renewal of registrations of doctors of the state, has now made such renewals only optional, and has allowed the doctors to only update their addresses, without paying any charges. This was done after the medical fraternity of Karnataka unitedly refused to renew their permanent registrations, after pointing out several legal and procedural lapses in the process. Although such scepticism had begun in 2014 itself, soon after the rumblings regarding the issue, it snowballed into a strong opposition in May 2016, after the schedule for renewal was posted on the social media in the name of KMC.

The medical fraternity of Karnataka erupted in unison after April 20th 2016, when a message was posted on the social media, supposedly on behalf of the Karnataka Medical Council (KMC), calling for renewal of registrations with 30 CME credits starting from May 2. The very same social media was used as the platform to reach the medical practitioners all across Karnataka so as to galvanise this unique protest; not a paise was spent, no posters were printed, no slogans were raised, no work was disrupted, no names were called or slandered. It surely was a most democratic, most peaceful, most dignified protest to save the constitutional and legal mandates, to stop a state medical council from acting beyond the scope of the law.

Most branches of the Indian Medical Association in the state passed unanimous resolutions to boycott the illegal renewal; later, a special meeting of the office bearers of all the branches was convened by the IMA – Karnataka State Branch at Bengaluru on May 8th, 2016 and this meeting was also attended by the President and members of Karnataka Medical Council. After detailed deliberations, this meeting also unanimously decided to boycott the renewal. Following this, KMC agreed to allow only updation of the addresses at no cost, and renamed it as Data Renewal/Updation; KMC also decided to abandon the CME Credits.

Between May 10th and June 16th, the data renewal and updation has been completed in 8 districts and it will be conducted in another 10 districts from June 20th to 30th and thereafter (July 4-9), in the remaining 10 districts of Karnataka. 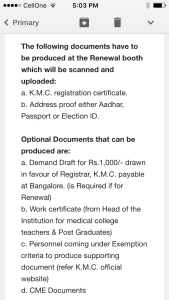 Although some vested interests are trying their best to confuse and scare the medical practitioners to get their registrations renewed, KMC has very clearly provided the option to only update the addresses without any charges. Its online portal [http://kmconline.in] for fixing the appointment at the data updation booths provides a clear option for only updation, and the e-mail acknowledgment also confirms the same, by clearly mentioning that the DD for Rs 1000 needs to be paid only if renewal is opted.

The opposition to KMC’s move to enforce renewal of registrations has been solely on the basis of legal and procedural lapses. As the medical practitioners are already possessing permanent registrations and as the Karnataka Medical Registration Act 43 of 2003, now in force, does not provide for renewal of registration every 5 years and for 30 CME credit hours, such renewals would have no legal basis. Therefore, IMA KSB has urged all the medical practitioners of Karnataka to only update their addresses, mobile numbers and e-mail IDS with the KMC by visiting the booths and not to renew their existing permanent registrations and not to make any payment at these booths. This has been clearly spelt out in the latest issue of IMA Focus, the monthly bulletin of IMA KSB. 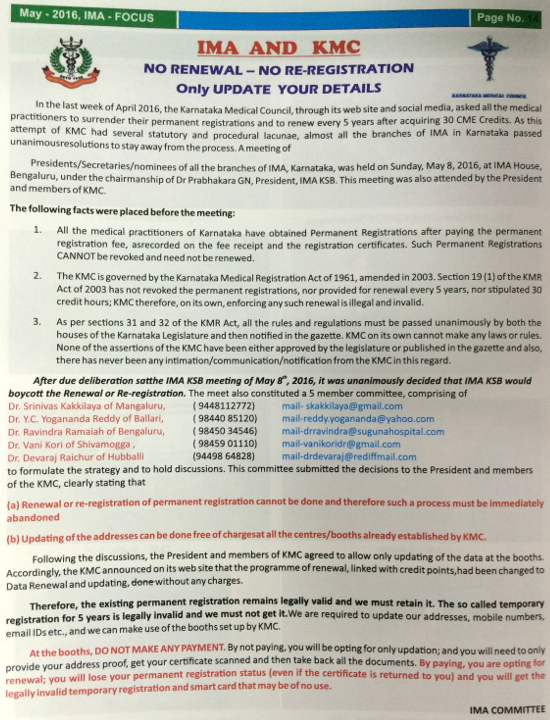