The opposition to the Karnataka Medical Council (KMC)’s plan to enforce renewal of registrations started soon after its first rumblings were heard. The present members of the Karnataka Medical Council were elected on August 31, 2011 and they assumed office by late 2013. In early 2014, KMC started spreading some information, unofficially, about the renewal of registration, tagged with CME Credits. Every CME was also sought to be accredited, by observers appointed by KMC. It was all done informally, through some medical professionals and some professional organisations, through unofficial statements and communications. Although it is mandatory for a statutory organization to issue official communications or gazette notifications or media notifications, they were never issued by KMC. 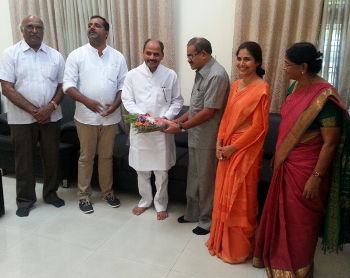 Delegation of IMA, Shimoga, led by Dr. Vani Kori, President, met the stacks Hon’ble Minister of Medical Education, Dr. Sharan Patil and Hon’ble Minister of Health, Sri UT Khader on May 28, 2014 at Bengalooru and apprised them about the problems arising due to the renewal of registration being sought by Karnataka Medical Council; Drs. Ashok Pai and others are also present.

In February 2014 itself, some doctors sent RTI queries to both KMC and the Medical Council of India (MCI) regarding the legal basis of such renewal. The replies (RTI reply from KMC, and from MCI) raised more questions than answers. So it was probed further and all the information so gathered was published on this web site in April 2014. The Shivamogga branch of the Indian Medical Association (IMA) took a lead by submitting memoranda to the Hon’ble Chief Minister, Medical Education Minister and KMC itself.

But nothing much happened in opposition thereafter. Many CMEs wholesale nba jerseys were conducted Book across the state and doctors clamoured wholesale jerseys for credit points.

The 2016 Boycott Renewal Campaign – How it Began:

When KMC announced the dates for renewal, yet again on social media [Document posted on KMC Web site] on 20th April 2016, the doctors of Karnataka started taking notice of the illegalities and started getting organized to question them.

On 22nd April, 2016, a simple message was posted on the Whatsapp group of Association of Physicians of India, Mangaluru Branch: ‘Who will join us if we plan to protest against the renewal of registrations?’ Within 2-3 minutes, more than a dozen thumbs went up. Next day, a meeting of about 10 members of API was called and was briefed about the legal drawbacks of the so called renewal with CME Credits [See box below]. The members, so convinced, decided to take the next step. A Whatsapp Group titled Boycott Renewal was launched on Sunday, 24th April, at 11.48am, with the following opening message:

Doctors across the state have felt the urgent need to organise themselves and boycott this so called renewal. The facts are as under; please spare some time to read these carefully:

Therefore, all doctors of Karnataka must boycott this renewal process until and unless it is done in a legal and transparent manner.

Let’s join together and apprise the Govt of the harassment being meted out to us.

Within a few minutes, the Whatsapp group got filled and another group had to be created. By evening that day, several groups were created across the state and messages posted on the principal group were shared across the state in no time. By around 6.30pm, some messages, supposedly from members of KMC, defending the decision to renew, were posted into these groups. All such messages were promptly and gently rebutted. 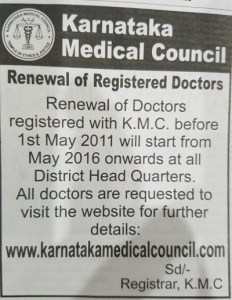 Very next morning, KMC published a small advertisement in many major dailies of Karnataka.

But this advertisement was not in a befitting format and lacked clarity. Therefore, the Campaign asked all the registered medical practitioners to send a letter to KMC by Speed a Post AD, seeking clarifications and the legal basis of renewal. The draft of this letter was posted on the Whatsapp groups by the same noon and by evening of the same day, hundreds of letters were dispatched to KMC. Some branches of IMA, like the Udupi Karavali branch, erected Help Desks to collect and dispatch the letters from the members.

On 28th April, the President of KMC issued a Press statement and that was also rebutted, with all the facts. Within the next 3-4 days, many branches of IMA across Karnataka, like Udupi, Mangaluru, Hassan, Chikkamagaluru, Shivamogga, Dharawad, Hubballi, Ballary, Gangavathi, Raichur, Siruguppa, Bagalkot, wholesale mlb jerseys Mandya, Gadag decided unanimously to boycott the renewal process and by the next week, other branches like Kalaburagi, Tumakuru and others also decided to stay away. On the 7th day of the campaign, when the weekly KMC meet was scheduled, four practitioners, namely Drs. Yogananda Reddy of Ballari, Srinivas Kakkilaya of Mangaluru, Shrikanth Hegde of Shivamogga and PV Bhandary of Udupi, wrote an open letter to the President and members of KMC, urging them to reconsider the decision to enforce CME linked renewal. On that day, KMC decided to waive off the requirement of CME Credit and also to reduce the fee, But this was rejected CME by the campaigning doctors; it was made clear to KMC that it had no legal sanctions for renewal and had no powers to change the rules midway as it pleased, and that any such changes were possible only through enactment by the legislature, followed by gazette notification.

By cheap mlb jerseys day 10, many branches of IMA urged the President of the state branch, who also happened to be an elected member of KMC, to convene a special meeting of the Presidents and Secretaries of all the branches of IMA within the state. Such a meeting was called at Bengaluru HQ of IMA on May 8th, 2016, the 15th day of the campaign. This meeting was also attended by the President and members of KMC. All the facts related to the issue were placed before the meeting and after due deliberations, it was unanimously decided that IMA Karnataka State Branch would boycott the renewal of registration. The meet also constituted a 5 member committee, comprising of Drs Srinivas Kakkilaya of Mangaluru, Yogananda Reddy of Ballari, Ravindra Ramaiah of Bengaluru, Vani Kori of Shivamogga and Devaraj Raichur of Hubballi to formulate the strategy and to hold discussions.

Following this, the President and members of KMC held discussions with the committee. It was agreed by KMC that renewal process cannot proceed in the absence of supporting provisions in the KMR Act. Considering the arrangements that had already been made by KMC to erect the booths in the various districts, IMA agreed that the practitioners would visit the booths and provide data for updation of addresses, and also provide photo captures. The IMA committee persisted with its objections to capturing of finger prints, and forwarded the legal opinion on the matter to KMC.

Following all these discussions and agreements, KMC announced on its web site on May 10, 2016, that the programme of renewal linked with credit points had been changed to Data Renewal and Updation, to be done without any charges. 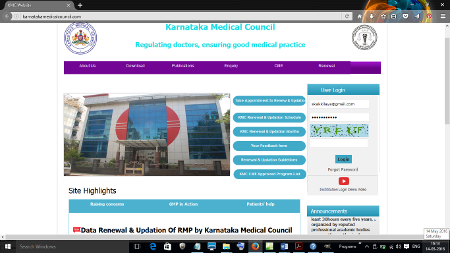 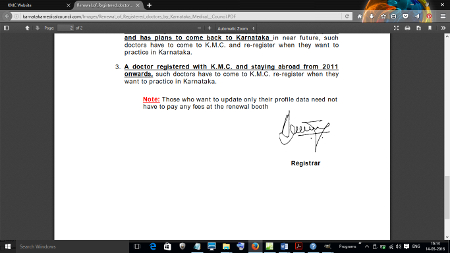 Even after all these, some vested interests have been trying to create confusion and fear in the minds of the doctors. However, KMC’s stated position has not changed, and the registered medical practitioners of Karnataka are opting for only fee updation, and the large majority have stayed away from the illegal renewal of registration.