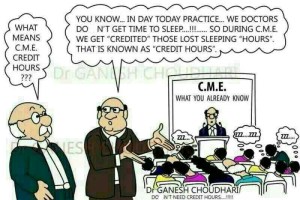 The Credit Hours Confusion is not only interesting but also reflective of the lackadaisical attitude of the powers that supposedly control medical profession in India. There are several confusions and discrepancies with regard to the required credit hours, award of credit hours, exemptions etc., between various state medical councils.

There is much more: as all the state councils offer 4 credit hours/year automatically to medical college teachers (see Table below), they would be required to attend not 120 hours, but just 40 hours in 5 years to get the remaining 10 credit hours (or better, just give 2 lectures per year in any of the CME Programmes!).

The Karnataka Medical Registration Act amended in 2003 requires a Medical Practitioner to produce certificates for having attended CME Progammes for not less that one hundred hours; it does not mention of credit hours and it does not specify the number of years. But the KMC, acting on the basis of its own resolutions (as per the above mentioned RTI response) stipulates 30 credit hours per five years, that translates into 120 hours of CME (@ 2 Credit hours/8 hours of CME). Mind boggling, to say the least.

The Travancore-Cochin Council of Modern Medicine had tagged renewal of registration every five years, to 30 hours of CME programme in May, 2004. The notice issued by TCMC again on Jan 9, 2015, stated that a physician must participate in professional meetings as part of CME Programmes for at least 30 hours every year!

While some state medical councils have made renewals mandatory with requisite CME credits, some others are seeking renewals without mandatory credit hours and some have started awarding CME credits without any need for renewal. But the reasons for such discrepancies between the states are not clear at all.

In Gujarat, medical practitioners aged above 60 years are exempted from mandatory CME, in Karnataka the age limit for exemption is 65 years and in Maharashtra it is 70 years, but in Uttar Pradesh (UP) and Madhya Pradesh (MP), no one is exempted!

And worse, the credits awarded for CME and other activities are highly variable across the states.

The accreditation policies are also different from one medical council to another. While in some states the organizations/institutions that conduct the programmes need to be accredited, every year to once in 5 years, with or without inspections, in some councils like KMC, every CME needs to be inspected before accreditation. While the scheme ratified by the MCI makes no mention of accreditation fees, every council is charging accreditation fees ranging from Rs. 1000 to 5000. It is indeed appalling that the state medical councils are seeking to accredit national level organizations and it is more appalling that these organizations are willingly subjecting themselves to such accreditation and ‘inspections’ of every CME Programme. Also, when MCI is promising funds for such programmes [see], some state medical councils are forcing the organizers to pay the fees for accreditation and also to bear the expenses of the so called inspectors! Such payments to the state councils and their so called inspectors would only add to
the financial burden of the organizers, which in turn would have to be borne by the medical practitioners.

After two reminders on our RTI query, to provide the copy of the resolution, KMC sent a certified copy of the proceedings of the 273rd meeting of the council held on 26th December 2013, wherein it claims to have resolved that the TA/DA would have to be taken care of by the host organization.[See] It follows that any TA/DA paid to any inspector of KMC by any branch of IMA/API etc., or other organizers of CME Programmes/conferences held before 26th Dec 2013 must be immediately reimbursed by the Karnataka Medical Council. All those who have made such payments must claim the reimbursement from KMC.