Following are the irrefutable legal facts: 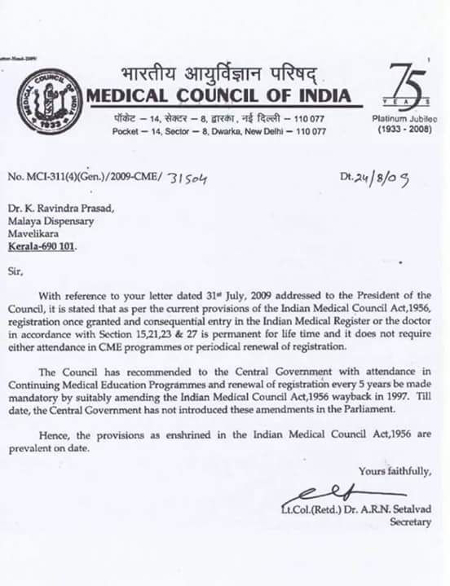 According to IMC Act 1956, as clearly enumerated in the letter from MCI in 2009, registrations with Medical Council is Permanent, does not need CME accreditation or periodic renewal (and the IMC Act has remained unchanged since this letter) 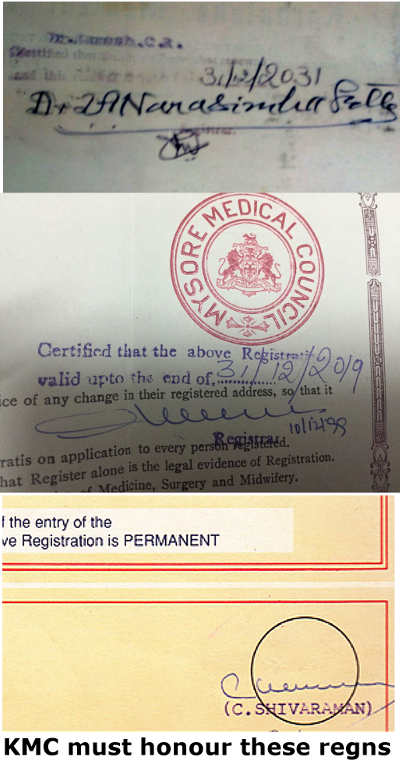 Section 13 of the Karnataka Medical Registration Act 1961 and Section 39 of the Karnataka Medical Registration Rules 1963 stipulate payment of fee of Rupees Fifteen for registration. Section 19 of the KMR Act of 1961 and section 43 of KMR Rules 1963 regarding renewal of registration stipulate that each medical practitioner shall pay to the Medical Council cheap jerseys on or before the thirty-first day of December of every year, a renewal fee of two rupees for the continuance of his name in the register. However, as many practitioners used to falter in paying this annual fee, KMC on its own, started collecting fee of Rs. 97 and above (plus Rs 20 for registration) as Permanent Registration Fee and started issuing registration with life time or permanent validity. Registrations done before 1984 were re-stamped with validity of 25, 50 or life time, after collecting suitable fee.

This KMR Act of 1961 was amended in 2003 (Act 43 of 2003, notified in the State Gazette as No 1106 on Sep 16, 2003) In this KMR Cashel Act of 2003, Section 19 (1) Renewal of Registration reads thus: ..each medical practitioner shall pay to the Medical Council a prescribed fee on or before such date as may be prescribed for the continuance of his name in the register provided that the renewal of registration shall not be done unless the registered Medical Practitioner produces a certificates for having attended a continuing Medical Education program Doctors for not less than one hundred popul?ra hours conducted by an organization or institution recognized by the Medical Council.

The Gazette Notification of the amended KMR Act 43 of 2003: the words ‘renewal every 5 years’ or ’30 CME Credit points’ are clearly missing in this amendment and KMC cannot insert these words on its own, that would need another amendment and another gazette notification. Until then, KMC cannot insist on 5 year renewal or 30 Credit Points. And such an amendment will not come. Therefore KMC has no legal basis at all for enforcing renewals. 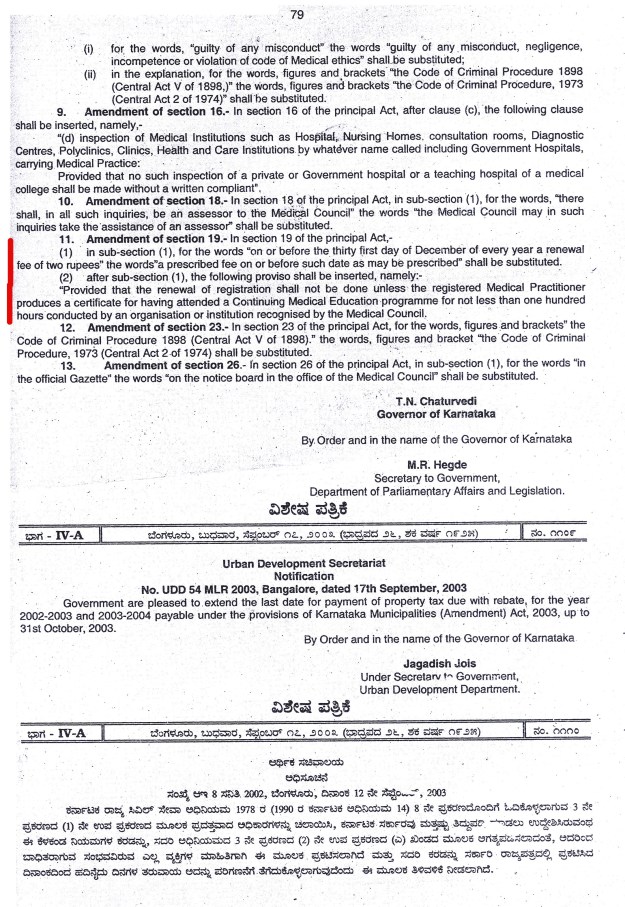 The Gazette Notification of the amended KMR Act 43 of 2003: the words ‘renewal every 5 years’ or ’30 CME Credit points’ are clearly missing in this amendment and KMC cannot insert these words on its own.

By way of amendment, words ‘Every year’ in Section 19 of Principal Act have been removed. Proviso to amended Act further states that ‘renewal of registration shall not be done unless the registered Medical Practitioner produces a certificate for having cheap nfl jerseys attended a Continuing Medical Education program for not less than one hundred hours conducted by an organization or institution recognized by the Medical Council’. However, amended Act is silent about time frame for payment of the prescribed fee and also for submitting the certificate of attendance in Continuing Medical Education program. Further, reading of Section 31 and 32 of the Act further makes it clear that it is the state government which alone can frame rules in that regard by causing notification in the official gazette. Hence, except Section 15 of the Act, no other provision of the Karnataka Medical Registrations Act provide for revocation of registration of certificate once issued in favor of the Medical practitioner. According to Section 15 of the State Act, such removal Fire is possible only if misconduct of the practitioner is proved HTML on enquiry. And until the prescribed fee is determined by the state Government by causing gazette publication, amended provision of the Act cannot be given effect. As the practitioners have already paid the permanent registration fee, the council cannot disturb the registration of the Medical practitioner whose name is already enrolled in the register. The council being the statutory body is bound to honor the certificate it issued earlier. Hence, entire claim of the council regarding the need to renew the registration is barred by principles of estoppels. Further, if the ‘proviso’ to amended Act of 2003 (section 19 of amended Act) is made effective by publishing gazette notification, Renewal same shall be unconstitutional and could be challenged before the court. Therefore, enforcing any such renewal is illegal and invalid. 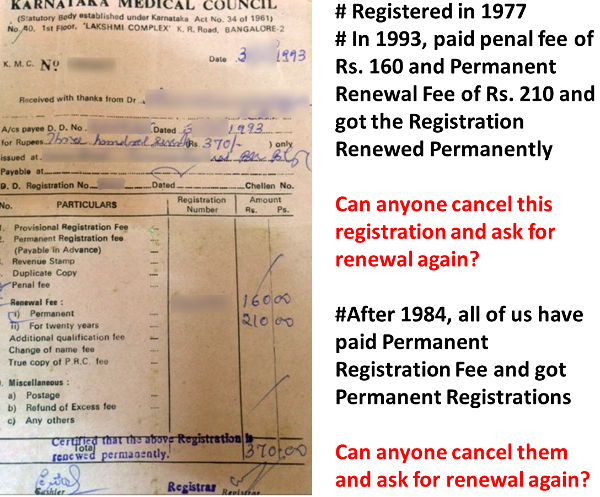 It is therefore clear that none of the assertions of the KMC, posted on earlier occasions or published in the Public Notice of May 26, 2016, have been either approved by the legislature or published in the gazette. KMC, being a statutory organisation, must not only follow the statutes, but also follow the procedures. KMC must issue official notification on the gazette with the consent of the wholesale jerseys goverment and must send official letters to every registered doctor. KMC has never issued any such notification or letters until now. Therefore, none of these measures are cognisable.

Therefore, the existing permanent registration remains legally valid and we must retain it. The so called temporary registration for 5 years is legally invalid and we must not get it. With CME Credits now abandoned by KMC, the smart cards are also of no use and no one should not waste any money for it. Therefore, DO NOT RENEW, DO NOT GET A SMART CARD, DO NOT PAY.

It now appears that KMC is well aware of these shortcomings, but its attempts to plug the legal loopholes have remained unsuccessful. A letter written by the President of KMC to the Minister of Medical Education, dated 26 Sep 2015 and sent on November 14, 2015 is interesting wholesale jerseys and revealing. The letter claims that the matter relating to CMEs and credit points was discussed in the 340th meeting of the council held on 11th July 2015: thus it appears that the matter of CME credits was not even discussed and/or officially recorded by KMC before that date! Along with this letter, KMC sent a draft of new amendments to the Karnataka Govt. But it has been more than 7 months, and the Govt is yet to consider it. Therefore, as on date, there is no law to permit KMC to renew the registrations of the practitioners every 5 years with 30 CME credit hours and KMC is well aware of that fact. The very fact that KMC had to send this draft to the Govt, also clearly means that KMC has no powers to make any rules! (The draft of amendments appears draconian and dangerous and needs to be opposed in toto)

Therefore, at present, Karnataka Medical Council cannot go ahead with the renewal with CME Credits. It can happen only after the amendments permitting such renewals are passed by both the houses of Karnataka legislature, sitting for 30 days of session consecutively, and after such an amended act gets the nod of the President of India and gets notified in the gazette. Even after all that, such renewals can apply to only prospective registrations, and not to the existing permanent registrations. As we know it, such an amendment will never see the light of the day.