The Travancore-Cochin Medical Council (TCMC) of Kerala initiated the process of renewal of registration in 2009.[See] The Travancore-Cochin Council of Modern Medicine in its meeting held on 28th May, 2004, resolved to introduce renewal of registration of Modern Medicine doctors every five years, subject to the condition that the respective doctors shall produce certificates to the effect that he/she has completed 30 hours of CME programme [30 hours of CME, NOT 30 Credit hours?!]. Later, the TC Council of Modern Medicine held on 5th Feb 2009 resolved that all Modern Medicine doctors registered on or before 31-12-2004 should renew their registration before 31-12-2009, and thereafter, every five years. Accordingly, notifications were issued in this regard.[See]

The Qualified Medical Practitioners’ Association of Kerala (QPMPA) filed writ petitions (W.P.(C) Nos. 31277/09, 31654/09 and 34884/09) in the High Court of Kerala in 2009, challenging the above mentioned notice of the state medical council for renewal every 5 years; the Union of India, MCI, state of Kerala and Travancore-Cochin Council for Modern Medicine were cited as respondents. The petitioners contended that there was no power vested in the state council to issue any directions to any medical practitioner to renew his registration. The Hon’ble Court awarded a stay on the process of renewal and finally the state medical council relented, and limited the renewal to once, for the sake of updating the addresses and adding security features to the registration certificates.[See QPMPA Journal Jan-Feb 2010 Extract]

The TCMC sought renewal of registration without the support of a suitably amended TCMP Act (even to this day, the Travancore-Cochin Medical Practitioners Act, 1953 does not have a word on renewal of medical registration). The decisions of the TCMC were based merely on the resolutions and letters of the MCI, and therefore the objections of the QPMPA were held as valid.

In a letter to Dr. Ravindra Prasad of Mavelikara, Kerala, the MCI [No. MCI-311(4)/(Gen)/2009-CME/31504, dated Aug. 24, 2009][See], stated that as per the current provisions of the Indian Medical Council Act, 1956, registration once granted and consequential entry in the Indian Medical Register of the doctor in accordance with sections 15, 21, 23 and 27 is permanent for lifetime and it does not require either attendance in CME programmes or periodical renewal of registration. It further stated that the Council had recommended to the Central Government way back in 1997 to make attendance in Continuing Medical Education Programmes and renewal of registration every 5 years mandatory and to suitably amend the Indian Medical Council Act, 1956. It further stated that till date, the Central Government had not introduced these amendments in the Parliament and hence, the provisions as enshrined in the Indian Medical Council Act, 1956 were prevalent on date.

TCMC and CME Credits: The Latest 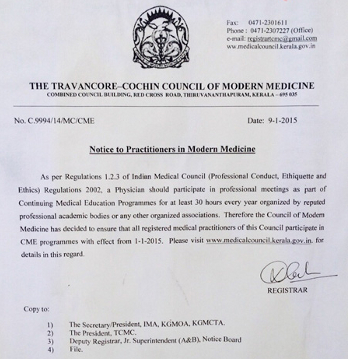