The origins of the saga of renewal of registrations are at the doors of the Medical Council of India (MCI). It appears that the first moves in this regard were made about two decades ago, in 1994 to be precise. The Thirteenth Report of the Committee on Subordinate Legislation of the Tenth Lok Sabha (1991-1996), also known as the Amal Dutta Committee Report, submitted in May 1996, [Government of India, 1994, (614.063 / GOI / 3609)] made a recommendation for renewal of registration of medical practitioners. The Committee recommended amendment in the Act in order to make five year renewal of registration compulsory. The committee also put the onus of renewal onto the doctors by saying that, “the doctors should inform in writing the Medical Council that they want to renew their membership.” The Committee also thought it to be correct to tag renewal with the continuing medical education. Taking cognizance of the government grants made available to the council(s), the IMA and other organizations, and their efforts in organizing courses and programmes for continuing medical education, the committee felt concerned about the less than adequate interest shown by doctors in availing of such facility. It also wanted, as in some other countries, the doctors be given credits for attending such programmes. Accordingly, it recommended that a minimum of 30 credit hours be made necessary to renew registration every 5 years. It also recommended that the councils, the IMA, universities and other institutions should be motivated by the government to organise continuing medical education courses and charge for it from the participants to recover the cost. [This information has been obtained from Jesani A et al. Laws and Healthcare Providers. A Study of Legislation and Legal Aspects of Health Care Delivery. Centre for Enquiry into Health and Allied Themes. January, 1996. pp 27-28. Available at http://www.cehat.org/go/uploads/Lhcp/lhcp.pdf.]

At about the same time, in May 1996, a national workshop on medical education conducted under the auspices of the MCI made a recommendation for renewal of registration after every 5 years along with compulsory CME with at least 30 credit hours in each year (i.e. 150 credit hours in 5 years, as against the 30 credit hours in 5 years recommended by the Amal Dutta Committee). Later, the General Body of the Medical Council of India, at its meeting held on 27th February, 1997, recommended the renewal of registration after every 5 years and also suggested amendments to the Indian Medical Council Act for this purpose, as there was no provision in the Act for such renewal. The Council also recommended that the renewal of registration should be linked with compulsory CME attendance with a minimum of 30 credit hours every year.[Medical Council of India. Executive Committee: Minutes of the meeting of the Executive Committee held on Monday, the 9th Sept.,2002. No.MCI-5(3)/2002-Med./ Available at http://www.mciindia.org/meetings/EC/2002/EC%20minutes%209th%20Sept.,02.pdf. pp 13-18.]

Following this meeting, the MCI wrote to the Central as well as the State Govts., and State Medical Councils, pressing for suitable amendments in the Indian Medical Council Act and the State Medical Registration Acts. State Governments and State Medical Councils were also requested to identify the bodies/authorities/organizations who will provide CME to all medical practitioners, both general physicians and specialists (including those in Govt. service or in private Hospitals/Nursing Homes/Dispensaries or in private practice) with structured curriculum for each programme and also issue certificate of credit to medical practitioners indicating the number of credit hours etc.[Same as above]

The first such letter, MCI-311(4)/97-CME/1042 was written on April 10, 1997, and was followed by a reminder on Aug 19, 1997. But it appears that none of the state or UT Govts., responded favourably to this proposal. In another letter dated November 17, 1997 (MCI-311(14)/97-CME/Vol II/27343), the MCI stated that the response of the state Govts.,/State Medical Councils has been very poor, particularly with regard to the action taken to provide CME programmes to all registered medical practitioners. The letter also asked them to act expeditiously to amend the State Medical Council Acts for the purpose of renewal of registration.

But none of the state Govts or medical councils bothered to follow these suggestions. On 2nd January, 1998, the MCI wrote once again (MCI-311(14)/97-CME/30196) to all state Govts., and medical councils, lamenting that it was unfortunate that no state govt had intimated the action taken to amend their state Medical Council Acts for providing renewal of registration of medical practitioners after every 5 years and about the steps taken to implement the compulsory CME Programmes. This letter sought very early action, because, the Central Govt., apparently, was pressing for early reply from MCI.

But then no one was convinced and no govt., acted; and most of them remain unconvinced even to this day. Although the idea of once in 5 years renewal-for-CME was first mooted by a Parliamentary Committee in 1996, our law makers in the very same Parliament, with all their wisdom, have not taken any follow-up action on the issue in the last 2 decades. As a result, the Indian Medical Council Act remains unamended with regard to the renewal of registration and therefore, the registration once done is permanent.

There have been some comments that our lawmakers are slow to respond [see]. However, it is also possible that our law makers are not convinced about the need for renewal or that they have decided against such a move having considered all the possible problems and ramifications. Whatever the case may be, the will of the Parliament is supreme and therefore, until the Parliament amends the IMC Act, neither the MCI nor the state medical councils should initiate the process of renewal. 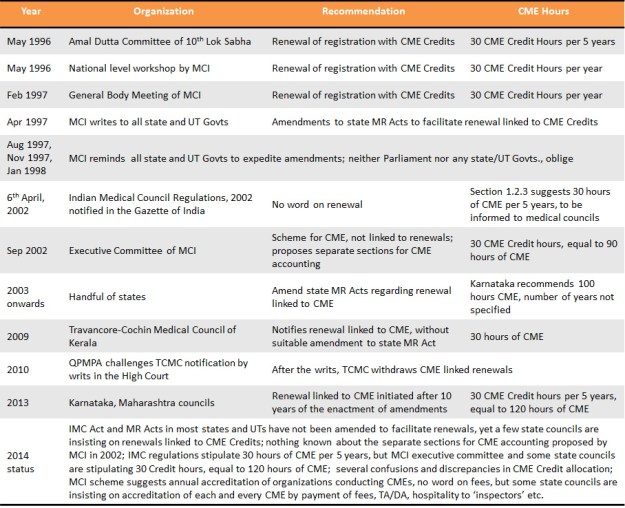